DISCLAIMER - My blog is an attempt to show respect to films some small-minded, intellectually dishonest hipsters automatically label "bad". There is no film I discuss here that I believe to be bad at all.  The title of the blog comes from a discussion that took place some years ago when I was trying to explain the appeal of these films. The title is not meant to suggest I think these films are bad in the least.  Remember - ART IS ART! 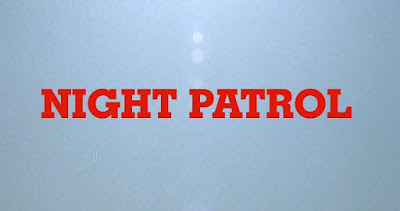 There was a "Silver Age" of Comedy in both film and television that started in the early 1970s.  This amazing comedic ear was due to the influence of programs like Laugh-In and Saturday Night Live as well as movies such as The Groove Tube and The Kentucky Fried Movie.  Motion pictures such as Meatballs and Animal House inspired a wave of copycats like G.O.R.P and laid the groundwork for films like Porky's.

This period was a time when everyone seemed to be able to take a joke -even if when it was at their expense. This era of comedy came to an inglorious demise in the early 90s despite the best efforts of comedians like Damon Wayans and Jim Carrey, who sadly, couldn't course correct a world where Pauly Shore and Larry the Cable Guy were considered comedy gold. There was a minor resurgence in the early 2000s thanks to the talents of performers and producers like Will Ferrell and Judd Apatow.

Tragically, The Hangover II blindfolded comedy threw it in the trunk of a beat-up Camero, drove it out to the desert and shot it in the head.

The remains of comedy were never recovered.

RIP Comedy.  Now we get "Satire."  Webster's defines "Satire" as comedy without laughter.

But, before the untimely demise of comedy, the planets and stars aligned to give the world one of the funniest, wonderfully disgusting and amazing comedies every committed to celluloid - 1984's Night Patrol.

This film boasts a pedigree like few others.  There aren't many films that can boast of a more eclectic cast. Night Patrol features Linda Blair (possibly at the height of her 80s film work), Billy Barty, Pat Paulson, Murray Langston (and the Unknown Comic), Pat Morita, Jaye P. Morgan, and Jack Riley, not to mention a young Andrew Dice Clay (as Andy Clay).

However, just as impressive as the cast are the filmmakers responsible for creating this comedic masterwork.  In addition to Murray Langston, co-writers included brilliant writer and director William A. Levey (Blackenstein, The Happy Hooker Goes to Washington), Bill Osco (Flesh Gordon, Alice in Wonderlands: An X-Rated Musical Fantasy) and the brilliant Jackie Kong herself. 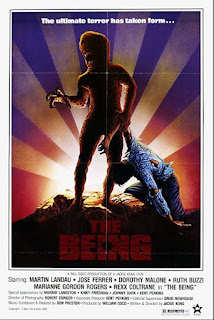 I want to say a bit about Jackie Kong.  I've been a fan of hers since the early 80s.  I had (have) an Uncle who ran a pretty extensive video store in Malden, Missouri, at the peak of the video rental craze. He gave me many posters that used to hang in the in the store.  Sadly or perhaps even tragically, the sheer stupidity of my youth divested me of these posters.  In fact, the sheer stupidity of youth divested me of many things. In any event, one of the posters that used to hang on my wall during my high school days was for The Being. The Being was the first film written and directed by Jackie Kong.  I would rent that picture pretty regularly, and in fact, lost track somewhere after the fifth rental. Although Night Patrol saw a theatrical release, I didn't have the good fortune to see it in the cinema, but, as soon as I saw Jackie Kong's name on it, it went into my regular rental cycle as well.

Jackie Kong, in my opinion, doesn't get the love and respect she is due as she is clearly a skilled writer and director.  If you watch Blood Diner (perhaps her greatest film), you will realize she is as astute as directing horror and comedy as Sam Raimi.  Now that we live in a world of endless reboots, I would hope we could take advantage of that trend and have a Jackie Kong penned and directed version of The Evil Dead.  I firmly believe it would meet or exceed the brilliance of the original.

Recently, Jackie Kong was the special guest on the revival of Creature Features during the episode featuring The Eye Creatures.  During the episode, she discussed the recent Blu-ray release of Night Patrol. She discussed how she pretended to be an actress to get into Martin Landau's acting class so she could get a copy of the screenplay for The Being to him and convince him to star in the film.  She indicated he was so impressed by her bold move that he accepted a role in the picture.  Additionally, Delirium magazine recently ran an article about Jackie Kong in honor of Women in Horror Month, and I would encourage you to check it out as well as check out the episode of Creature Features she appeared on via YouTube.  I'd encourage you to subscribe to the Creature Feature YouTube Channel and watch the episodes when they live stream... If we don't support our Horror Hosts, how can they support us?

The plot of Night Patrol focuses on Motorcycle patrolman Melvin White (Murray Langston), who is promoted/demoted to night patrol due to an endless string of law enforcement screw-ups, all hilariously presented.  The opening scene is equal parts funny and batshit insane.  This change in shift, however, causes issues for Melvin as he also moonlights as a comedian wearing a bag over his head.  However, as the Unknown Comic gains notoriety, there is a person committing crimes disguised as the Unknown Comic and telling jokes during their crime spree.

Billy Barty, who always had great comedic timing but was underused in almost every film he starred in, portrays the chronically flatulent and paranoid Captain Lewis.  The three "main" stars of the picture are the always beautiful Linda Blair as Officer Sue Perman, Pat Paulsen as Officer Kent Lane, and Murray Langston as both Officer Melvin White and The Unknown Comic. 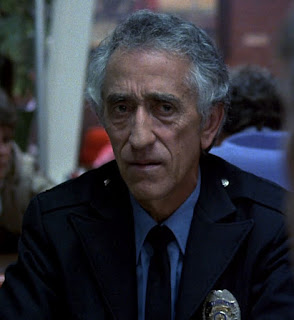 I'm not certain comedian Pat Paulsen was particularly well-known by my generation when this film was released. But, being the child of small-town hippies, I was exposed to Paulsen by way of his appearances on The Smothers Comedy hour as well as his appearances on The Tonight Show and other shows.  I'm starting to wonder when I ever slept as a child as it certainly seems my parents let me stay up all night and pretty much watch whatever I wanted, which I imagine explains a great deal about me, but I digress.

Paulsen was a perennial presidential candidate - running in six presidential elections. His first run for high office began in 1968, and his last attempt was in 1996, not long before his passing in 1997.  The brilliance of each Paulsen run for President was the ability to skewer each side as his runs were ostensibly for laughs.  But, then, hasn't that been the case of most candidates running for President?  In any event, Paulsen, who often appeared with a bit of a sad-sack persona, plays against type in Night Patrol as a real ladies man.

Linda Blair is great fun to watch in this film.  She has only made a handful of films that showcase her incredible comedic timing.  I don't blame that on stereotyping, if Linda Blair accomplished anything during the 80s, it was blowing away the child victim persona from The Exorcist as she moved on to a variety of genres.

70s kids will also appreciate the work by almost permanent Gong Show judge Jaye P. Morgan as well as 70s sitcom fixture Jack Riley.  Through much of the 70s and 80s, I was always mistaking Jack Riley for Bill Daley as they shared similar features and had the same droll delivery.  Finally, I want to call out the Pat Morita cameo for being both hilarious and entirely politically incorrect - Morita's scene is one that would, for better or for worse, not be able to appear in a film made today. At least not a film that wanted distribution.

The film is being released on Blu-ray. It is also available as an HD rental for $3.99 or a digital purchase for $9.99 on Amazon.  I did the rental, and, of course, I'm kicking myself for not coughing up the ten bucks for digital purchase.

Obviously, I'm a fan of this brilliant film.  I'd encourage you to take an 85-minute trek back to the less uptight 1980s. Night Patrol would make a great double-feature with Police Academy or maybe a triple feature with the John Murray classic Moving Violations.

Posted by JakeBanzai at 3:01 PM No comments: