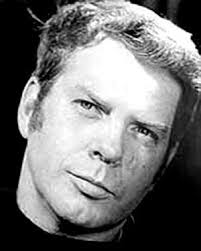 To fans of Grindhouse films, that name tends to illicit only one of two intense feelings – respect or bitterness.   I can personally say, having seen only half of Milligan’s filmography, I have nothing but respect for the man and his work. But, like all the great exploitation filmmakers, Andy Milligan and his life was a complicated stew of artistic impulse, disappointment and unstoppable drive.

There are a thousand reasons why I love Grindhouse cinema.  But perhaps one of the most significant and heart-felt reasons is the filmmakers themselves. I’ve written recently about Ted V. Mikels, the Findlays and Doris Wishman. Filmmakers who managed to make movies…sometimes against overwhelming odds.  It is hard not to respect that kind of artistic dedication.

Andy Milligan was born in 1929, just months before Ted V. Mikels in St. Paul, Minnesota. Most articles about Milligan mention that he was an “army brat”, the son of a father who retired as a Colonel in the US Army. As such, Milligan moved around the country throughout much of his youth. Milligan had a close relationship with his father, something he didn’t share with his mother.

Milligan was a veteran of the US Navy and after his discharge in 1951, he headed for the bohemian art scene of New York City and opened a small dress shop. The skills he learned as a dress maker became invaluable as he would do much of the costuming for his films, including period pieces requiring some of his more elaborate work.

In the early 1960s, Milligan would begin making films, often casting artists he’d met at Caffe Cino. In 2010, Milligan biographer Jimmy McDonough was asked by blogger Plan9Crunch about the effect Caffe Cino had on 42nd Street and Milligan with McDonough responding “I'm not sure it had any influence on 42nd Street. It had a great deal of influence on Andy, though. Freedom. It gave him the license to create. And to make flesh certain fantasies lurking in his mind. Very powerful, that. If I had a time machine that is one place, I'd go back to...the Cino, to watch one of Milligan's productions.”

Eventually Milligan would forge a tenuous relationship with producer William Mishkin who would bank-roll small amounts of money for Milligan to make sexploitation films such as Depraved and The Naked Witch.  These films would be the starting point for an extensive filmography. Although many of the films in Milligan's filmography still exists sadly a number have been lost.

As I’ve mentioned earlier, I’ve only seen about half of Milligan’s available films. One evening earlier this week, I decided to see what would turn up if I searched for Milligan on Amazon Prime. Of the films that were available to stream, one stuck out – Carnage. The other films that were available were pictures I’d seen previously (and should really write about soon).  But Carnage was a title I was entirely unfamiliar with so, of course, that was the film I decided to view.

The picture was produced during the first wave of direct-to-video films needed as video stores began to pop-up everywhere in the mid-80s.  IMDB lists the film’s budget as $32,500 and IMDB and Rob Craig, author of Gutter Auteur: The Films of Andy Milligan also indicates the film is shot on 35mm, but, I have to admit, during my viewing I wrote in my notes the film was shot in 16mm because the quality and the sound seem to me to be tell-tale signs of 16mm.  Additionally, because of some of the cramped sets, I would have assumed a 35mm rig would have been too large to use.  Nevertheless, I’ll defer to IMDB and Rob Craig.

Milligan shot the film at a home in Staten Island in May and June 1983.  A handful of scenes were shot in New York City proper. The earliest video release appears to have been in Australia in December 1984 with a US release on video in spring of 1986. Originally the film was shot under the title Hell House, but, was changed to Carnage for the home video release.

The plot of Carnage is a fairly standard haunted house film, with a bit of a twist ending. A newlywed couple purchases the “Home of their Dreams” on Staten Island. The house has been vacant for three years, the result of the suicide of the previous newlywed couple that lived there previously. Our couple, Carol (Leslie Den Dooven) and Jonathan (Michael Chiodo) are in the house mere minutes before odd occurrences begin.

The couple brush off the odd occurrences, but things begin to ramp up after Carol hires a housekeeper – Rose Novak (played by Lola Ross). One day, Rose is working in the basement, when an encounter with the specter of a woman in a wedding dress leaves Rose in a comatose state (and worse).  Other horrific occurrences take place as Carol and Jonathan begin to plan for their housewarming party with all their friends.

Milligan uses some marital problems between one of the couples preparing to come to the housewarming party as a subplot that isn’t fully explored but is handled as deftly as possible given some of the budgetary and time constraints for the film.

I enjoyed the film very much – but, then I’ve enjoyed all the Milligan films I’ve viewed. In fact, I’d say it is one of his best films filled with some genuine tension and some truly creepy scenes. I suppose if I had to come up with a complaint of some kind, I’d say the sound leaves something to be desired. I believe all the sounds was shot in camera and no Foley work or re-recording was done after the fact…but that is just a guess. 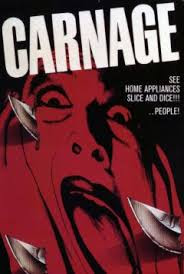 Who didn’t like the film? Well, author Rob Craig writes the following about Carnage in his previously mentioned book: “Carnage is artless and shoddy – even for a Milligan film – and much of the photography borders on the amateur.” Craig goes on to write “…the 92-minutes running times becomes quite tedious, padded with an abundance of extraneous filler material.” Of course, these things are always a matter of perspective.  Where Craig sees shoddy, I simply see a shoestring budget.  He and both agree on the sound quality though.

I wouldn’t suggest the ending of the film is Shyamalan in quality, but I found it intriguing and just enough out of left filed to be enjoyable.

If I’m being totally honest, I guess I’m just so entirely intrigued by Milligan I’d like a Milligan film if he just left a static camera pointed at a leaky faucet for 90 minutes. I’m not suggesting that is a good thing, but it seems to be where I’m at in regard to Milligan’s work.

However, I feel I’m in good company. In 2009, while discussing his film Bronson with Nick Dawson, Nicolas Winding Refn mentioned “The filmmakers I would have loved to meet are more obscure, like Andy Milligan. He’s a very obscure filmmaker who made films for Times Square in the 60s and 70s.” Eventually, Refn’s interest in Milligan lead him to begin to purchase obscure prints of Milligan films with Refn noting in 2012 “Then I began to get obsessive. I would go on eBay and buy anything connected with Andy. One day I came across McDonough himself (author of the most comprehensive biography of Milligan), selling his collection of Milligan film materials, including a unique print of Nightbirds (1970), about two hippies in love in London, and a few other super-rare titles – $25,000 (£16,000) for the lot. I did a travel commercial to raise the money, and I bought everything.”

Milligan in his later years would become somewhat hard to work with.  Often angry, I’ve read some articles that suggest he s possibly suffered from mental health issues – and I suspect that is likely as some of the issues I’ve read seem to indicate both a manic depressive personality as well as some severe self-esteem issues.

Milligan died of AIDS, financially devastated in June 1991 and is buried not far from here in an unmarked grave in Los Angeles County.

Like all great artists – Milligan was not fully appreciated until after his death.
Posted by JakeBanzai at 12:39 PM No comments: Links to this post