A look at Vinegar Syndrome's The Corpse Grinders Blu-ray 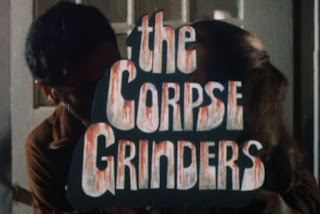 In October 2016, the world lost one of its most eccentric and creative filmmakers – Ted V. Mikels. Although he was barrel-chested with arms as big around as telephone poles and a huge boar’s tooth hanging from his neck, by all accounts he was a kind-hearted, gentle giant of a man who was fiercely loyal and endlessly creative. His drive to make art was unceasing until the day he died.

I first discovered Mikels decades ago when I stumbled upon a copy of The Astro- Zombies. Those were the days when film fans kept a copy of Leonard Maltin’s book handy as it was the easiest and quickest source of information about a movie whether it was coming on at 1:00 AM on a UHF channel somewhere or the most recent video rental. Although, if you were renting new films you might strike out as Maltin’s book was only updated annually.

Having whetted my appetite with Astro- Zombies, I eventually picked up a copy of the subject of this short essay – The Corpse Grinders.

The Corpse Grinders has a significant genre film pedigree. Directed by Mikels, the screenplay was written by Arch Hall, Sr. and Joe Cranston.  Arch Hall, Sr. may be most familiar with b-movie lovers as both the writer and co-star of the film Eegah. Eegah is a film notable for both being a starring vehicle for Hall Sr.’s son Arch Hall, Jr. and also for featuring a pre-Bond Richard Kiel. Much of the notoriety Eegah Has garnered over the years has much more to do with it being riffed by the gang on MST3K. But, despite some odd story choices, I’ve always had a soft spot for Kiel’s performance in this caveman-based version of King Kong.

Joe Cranston is also noted as a co-writer of the screenplay for The Corpse Grinders. Despite some interesting genre writing credits for Cranston, most would go on to agree that his greatest co-production would eventually be Bryan Cranston. 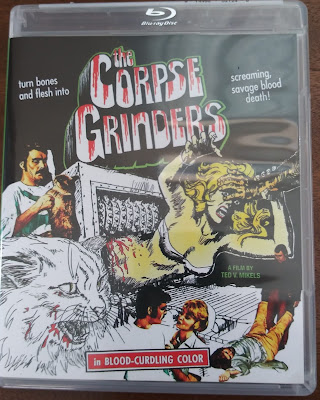 The Corpse Grinders has always intrigued me as it combines a plot about grave robbing and murders along with story of cats turned flesh eaters because of the lurid ingredients of Lotus Cat Food – the titular cat food company in the film. The Lotus cat food company in some financial distress and finding the supplies they need at a reasonable price is becoming an issue.  To get the bodies required, our two antagonists, Landau (Sanford Mitchell) and Maltby (J. Byron Foster) have been working with Caleb (Warren Ball), a cemetery caretaker for Farewell Acres and his wife Cleo (Ann Noble). Unfortunately for Landau, Caleb would like to be paid for the materials he is supplying. We discover later in the film that Landau is augmenting the bodies from Caleb with those supplied by a mafia looking tough guy named Monk (Vincent Barbi) and two morticians played by Stephen Lester and William Kirschner. 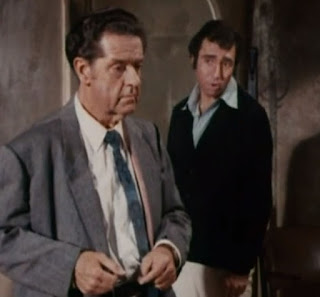 There is a single scene with the mortician and his assistant, and it is surreal. I’ve noticed IMDB and Rotten Tomatoes label The Corpse Grinders a comedy-horror film.  I can only surmise this categorization must come from the mortician scene. The problem is that the scene is not funny in the conventional sense of the word. It pains me to denigrate any of the work done in this film because the entire point of my blog is to celebrate and defend these movies. But that single scene just leaves me scratching my head every time I see it. I’m glad its there for some reason, but don’t understand it.

Meanwhile, our protagonists are Dr. Howard Glass (Sean Kenney) and his lady love Nurse Angie Robinson (Monika Kelly). When we meet our heroes, Nurse Angie is feeding her cat…Lotus cat food. Later in the scene the cat goes nuts and attacks Dr. Glass. 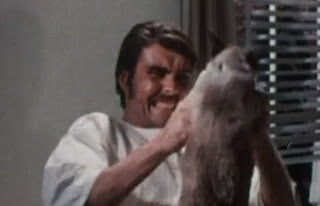 As more and more cat attacks begin to claim victims all over Los Angeles (or Pasadena) Dr. Glass and Nurse Angie begin to investigate.

What will they find?

Will they too become a tasty treat for tabby?!

This film was one of Ted V. Mikels most successful films financially mostly because of a brilliant marketing package Mikels developed. Called “The Final Dimension in Shock” Mikels put together a massive triple feature of The Corpse Grinders, The Undertaker and His Pals and The Embalmer. The triple bill even featured the very William Castlesque “Certificate of Assurance” indicating the patron was of sound mind and body and would not hold the producer liable should they suffer any detrimental effects from films. Mikels saw a great deal of success from this program and would go on to out gross many other bigger budget features. 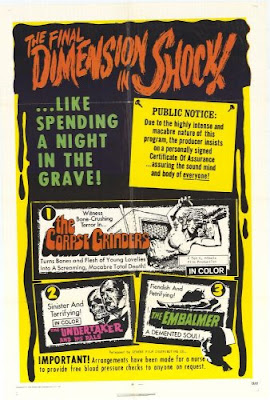 This brings me to the Vinegar Syndrome Blu-ray. A decade ago, when I used to get DVDs in the email from Netflix (not sure that is even an option anymore), I grabbed a copy of this film.  At the time, I thought the transfer looked pretty good. Of course, prior to that I’d only known the VHS copy which admittedly was pretty rough between the transfer to tape not being particularly good and just wear and tear on the tape itself. The Vinegar Syndrome Blu-ray opens with a disclaimer indicting the source for their disk still had signs of wear. And I suppose they are there, but the transfer is so gorgeous, the small, occasional artifacts that could be seen hardly distracting and really allow the viewer to appreciate the skill level of Mikels.

But the most amazing thing on the disk is the engaging and detailed audio commentary by Elijah Drenner, the writer and director of two of the most amazing documentaries ever produced – American Grindhouse and That Guy Dick Miller. Drenner’s commentary I believe sets the bar for what a commentary should be. In addition to his personal knowledge of Ted V. Mikels, Drenner’s commentary includes audio provided by Bill Carter of both Mikels discussing his views on patriarchal communal living as one of his “Castle Wives” (sometimes also referred to as “Castle Ladies”) as well as promotional audio to be played at the  drive-in as patrons pulled in for “Final Dimension in Shock” triple feature.  The addition of this audio to the commentary is like walking into a museum of priceless art – it opens a door of insight into the Mikels way of thinking in his personal life.

Drenner notes early in the commentary that Mikels did not concern himself with the “burdens of factual science” and suggests this was because of Mikels’ early career as a magician. Mikels was always, much like Edward D. Wood, Jr., about the big picture and not so much about the details.

The disk also includes a 2007 interview with Mikels which I believe is from the 2007 DVD from Image Entertainment. However, it is Drenner’s commentary that makes this disk an absolute must-have and one of the best media purchases I’ve made recently.

Finally, I want to address some things I read while compiling this little write-up.  I went looking for other reviews of the is film because I don’t want to cover entirely the same ground as others. In almost every review I read, the film is dismissed as poorly made trash and some went so far as to suggest that Mikels was a hack who had no business behind a camera.

I must ask – are we watching the same film?

I mean, I get it – most every genre film I love has boat loads of logical inconsistencies.  But, hell, so do all Disney movies or even the last three Star Wars movies (sadly now also Disney films). I always wonder why they generally get a pass while filmmakers like Mikels get pilloried? Is it budget alone?

Ted V. Mikels was a great many things and, he knew his way around lighting and shooting a scene and to suggest otherwise generally indicates to me that the writer of a review either watched the film on YouTube or, worse yet, didn’t watch the film at all. Or they simply want to feel superior or witty by deriding a man who accomplished so much. I could pick apart his films too, but I choose to see greatness shot on short ends.

In full disclosure, once Mikels began to embrace shooting on video tape, I had to pump my brakes. I’ve watched two of his “films” from that era, and all the hallmark qualities are there, but, Mikels was a 35mm filmmaker and it just pains me to see his video work. But I understand why he did it. An artist like Mikels would wake up each day with only one goal – to make movies. As funds became increasingly limited his mind didn’t stop coming up with ideas – he simply was running out of ways to tell the stories he dreamed up.

Ultimately, I feel bad for Ted V. Mikels. He never had the financial success he deserved. Between missing out on major studio distribution with The Doll Squad and being cheated out of money and prints by distributors, it feels sometimes like everyone was looking for a way to walk all over him. And, in his interview on the Vinegar Syndrome disk, he even admits that once the drive-ins started to die out, the primary venue for his type of film was dying too.  That of course, is not entirely untrue, however, some filmmakers like Charles Band and Fred Olen Ray learned to embrace the direct to video world in a way that Mikels never could.

Finally, if you get a chance, do pick up the disk from Vinegar Syndrome. They are one of only a small number of distributors making classic movies like this available. And this disk certainly shows the love and respect they have for these films and filmmakers.

By the way, I also want to mention that my screen grabs are not from the Vinegar Syndrome disk but from the Amazon Prime version of the film.
Posted by JakeBanzai at 1:29 PM