The Genius of Charles B. Pierce


I consider the 1970s to have been a gift. So many great names come to mind when I think about that era and the amazing genre films it gave us. But I always feel like one name fails to get mentioned as often as it should - Charles B. Pierce.

Pierce, born in 1938, wrote and directed several great pictures.  But, perhaps his two best known and classic drive-in pictures, are The Legend of Boggy Creek and the truly spectacular The Town that Dreaded Sundown.

He began his career as a Television weatherman and afternoon kid's show host (not unlike the late, great Briggs Gordon who portrayed Uncle Briggs on WSIL's The Funny Company in the 70s until the early 80s.  A man who deserves an article as well).  From there he moved into commercial work with an advertising agency that was quite successful.  He took the success he had in commercial work and began a mockumentary style film about the Foulk Monster of Arkansas - a Bigfoot type of monster which had terrified the locals for a number of years.

In the 1970s, the topic of Bigfoot (or related creatures) was big business in books, television and especially genre pictures.  In fact, Pierce's work was not the first Bigfoot themed movie of the 1970s.  The John Carradine picture "Bigfoot" (yes I know 1970 is actually the last year of the 60s but work with me here). But in the 70s alone you also could enjoy The Legend of Bigfoot, The Creature from Black Lake, The Mysterious Monsters, The Capture of Bigfoot, and even the picture I discussed last week - Shriek of the Mutilated.  A search for Bigfoot on Amazon Prime or Hulu indicates the topic is alive even in the 21st century (although I'd have to imagine undisputed drone footage would be available by now to prove the existence once and for all).

Key to the thick tension of The Legend of Boggy Creek is the use of the mockumentary style of the film.  I wouldn't go so far as to say the film is a predecessor of the found footage film.  But the style is used in such a way one does get the feeling they are almost participants in the film and not simply observers.

Seeing this film at the old Star-Vue drive-in was a thrill.  The movie unnerved me sufficiently as a kid I kept looking behind the car into the wooded area that surrounded the screen wondering what creatures lurked in the dark.  Realistically, probably just neighborhood kids hoping to catch a free movie but still...

Pierce's use of locals for the picture certainly adds gravity to the film.  Much the same way the first 15 minutes of 1999's The Blair Witch Project did.  Or, even to a greater extent, the classic Texas Chainsaw Massacre two years later. I think it is a commonality in the great horror films - that exciting but horrifying feeling you are watching something you weren't meant to see which makes you more implicated in what you are watching.  It is there to a small extent in Psycho, but it truly ramped up in the 70s with pictures like Boggy Creek, TCM, and with the killer POV motif, Halloween.

The picture was released in 1972, but I don’t recall seeing it until 1975 or 1976.  It was not unusual for films to make the drive-in circuit year after year, sometimes under different titles although that practice had declined significantly by the 70s.  For instance, I didn’t see The Texas Chainsaw Massacre or The Last House on the Left until the early 80s when those pictures would make the annual rounds.  Of course, with interest in Bigfoot being almost unwavering until the end of the decade, the film would manage to rack up profits for much of the decade.

As much as I adore The Legend of Boggy Creek, Pierce’s masterpiece would be the 1976 horror/mystery The Town that Dread Sundown which he directed from a screenplay by Earl Smith (also with a role in the film).  Part documentary and part conventional film, it tells the story of murder unsolved to this day in Texarkana. Over years of watching the film, I’m certainly not immune or unaware of some shortcomings.  But the deficiencies are few and far between and are in no way sufficient enough to reduce the overall classic nature of the film.

This film can also boast some amazing acting from the entire cast which features Ben Johnson, Andrew Prine, Dawn Welles and Charles B. Pierce himself as Patrolman A. C. “Sparkplug” Benson.  I may be a bit biased, but, I’ve always felt Pierce’s acting in the film is outstanding and he easily could have made a solid career as a character actor.

The film was successful enough, and ostensibly accurate enough, to generate a number of lawsuits from the families of some of the victims of the slayings.  In fact, just the legal wrangling after the films success is wild enough to write an entire essay detailing the complaints and the results.

The final sequence of the film is extremely well executed, and I think indicates the raw talent Pierce possessed.  A talent that was not entirely unnoticed as Pierce moved to California for a time where he became an acquaintance and associate of Clint Eastwood.

Pierce continued to work until 1988 and declining health began to take its toll. Even eventually having his arm twisted into making a 1984 sequel to Boggy Creek…which is not his finest work.  Pierce died in 2010 at the age of 71 living in a nursing home the last seven years of his life. However, Pierce left a rich legacy of amazing film. 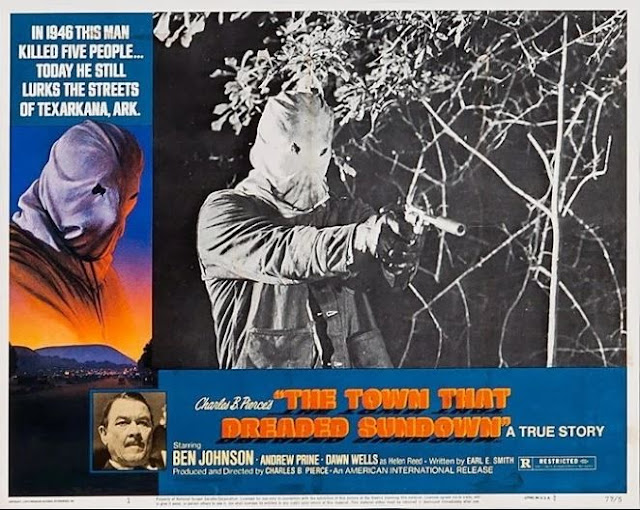 In fact, his work made a significant enough impression that in 2014 “meta-sequel” also titled The Town that Dread Sundown.  The film is unique in that Pierce film is discussed and is, in fact, being watched by the residents in the park as the film opens.  It is an enjoyable film, but, one that is not altogether complimentary to Pierce or his son.  I would certainly suggest viewing it, but, being familiar with the original will help you enjoy the remake? reboot? Sequel? Even more.

I hope, as time goes on, Charles B. Pierce is mentioned along with the other titans of drive-in cinema. Although his work was not as visceral as H.G. Lewis or Romero I think film historians will one day discover his influence is felt in film today.  And I think every kid who got freaked out watching The Legend of Boggy Creek at the drive-in owes Mr. Pierce a sincere thank you…

…so thank you Charles B. Pierce for being among those that made growing up in the 70s amazing!

Posted by JakeBanzai at 3:10 PM