If you stop and give it some thought, no matter how the technology changes, somethings about the movie business haven't really changed - namely, the marketing.  It is really a matter of cash, how much can be spent to market a picture and what is the most effective way to make someone remember the name of a film or better yet, in the video store days, make them grab that coveted tape from the shelf or drive to the multiplex and check out the new movie.

The film Jaws generally got the ball rolling, but, of course, it was Star Wars that made the marketing of a film actually more important than the quality of the film (well, to the extent that is still the case - you could argue William Castle started that in the 50s).  Not so much in the case of Star Wars ( a great film), but, you and I can, no doubt, name two dozen other films where this is the case.  I still have the watches from Burger King used to promote Congo, and aside from amazing performances from Ernie Hudson and Bruce Campbell I couldn't tell you much about the movie... other than I have two watches, still in their boxes, from when Congo was hitting theaters. Hell, what year was that.... 1995?

The watches, nor Ernie Hudson or Bruce Campbell could save Congo.  But, being honest, toys created the Transformers franchise and we all know how the third Batman movie was altered to make it more toy friendly... as were the Star Wars prequels.  Thanks George Lucas.

So, Jake (you're probably asking yourself) what does this have to do with The Dead Pit?  Great question - if you were a horror movie fan in October or November 1989, or even if you just went to the video store in late '89, you might recall a box on the shelf embellished with a series of raised graphics of an evil looking creature raising from a pit to give it a bit of 3D and tactile feel and a small button near the bottom.  When you pressed the button, the eyes of the creature would turn a vile green and flash. I watched dozens of people, who had no interest in renting the film, press the button and make a remark as they walked by.

Me?  Oh shit - I was sold.  I had to see that movie.  The graphic below doesn't really do the cover justice, but, it certainly gives you some idea what the cover looked like... just add flashing green to the eyes. 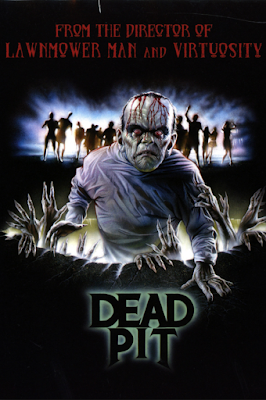 The point is - me, and thousands of others, rented this film, not because we necessarily cared or knew what was in The Dead Pit, but, the William Castle like marketing with the tape cover sold me and others, and made the movie a profitable venture for both video store and film maker alike.  Other low-budget fare would follow this lead. The two I'm most familiar with is DemonWind and Frankenhooker.  Although, the quote from Bill Murray on the back of Frankenhooker sold me more than the high-pitched "Wanna Date" from the Frankenhooker cover.

I come back to this film every couple of years.  It is certainly a bit of a guilty pleasure, and, honestly I'm thinking more about the first time I rented and saw it then I am generally paying attention to the picture itself these days when it's playing.  Such was the case five weeks ago when I saw it pop up on Amazon Prime... and feeling nostalgic (as I always seem to), I decided to fire it up.  However, this time, perhaps for the first time really, I watched it for the film itself - the pacing, story, plot points.  All the things you watch for when you are a "never was" screenwriter, and honestly, I was sort of impressed by the film.  Impressed enough to begin looking for the DVD or Blu-ray...and of course, I found it (once again from Code Red). 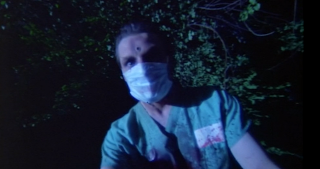 Released by Code Red in June 2008, the commentary is a bit dated.  In fact, two of the participants have since died, which always makes listening to the commentary on older discs bitter sweet. But, one thing came through on the commentary.  In fact, one thing always comes through on my favorite commentaries - the sense of camaraderie and struggle.  By the time Brett Leonard did the commentary, he had directed big budget features with Pierce Brosnan and Denzel Washington, but, in that recording room, looking at the film with the people who had helped make it, you can feel that sense of awe and wonder he had in the first place.  That Mickey and Judy, "Hey Kids, lets put on a show" enthusiasm that steers so many people into the film industry. 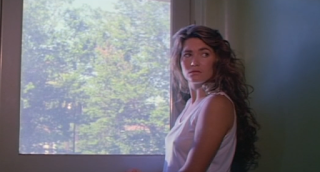 The plot if The Dead Pit is not a spectacularly new or brilliant one.  To some extent, it is a mad scientist story not unlike the ones we have been watching for decades.  However, what comes through in the viewing, and the commentary, is the awareness the story may not have been cutting new ground, but, the desire for it to still evoke a feeling of genuine dread, and provide a creepy good time for the people who did pick this gem up in the late '80s.

I must note, Cheryl Lawson, portraying the female lead of Jane Doe, nails her performance.  And the same can be said for the entire cast - some of them financially vested in the picture and some simply volunteers who wanted to help "put on the show." 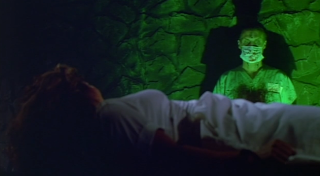 I never made movies (and likely never will).  I don't know a lot of horror fans excepts as followers (or people I follow) on Twitter and so, the genuine love and respect filmmakers, especially of smaller genre pictures, have for the time they spent with the people that helped make the movies resonates very deeply with me.  I don't have that... and I really want that kind of sincere fellowship with creative people. Maybe some day.

And, the commentary also drives home the point that, whether you're making The Dead Pit, or Mystic Pizza, if you are running on a tight budget and with little to no sleep, you are learning the craft of film making the way it was, ultimately, meant to be learned. By doing it. 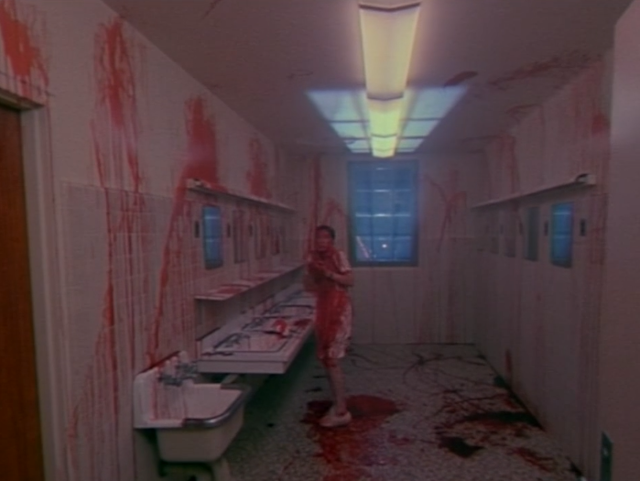 Anyway, I don't mean to be a shill for Code Red, but, I am certainly happy I picked up the disc...11 years later.  But, even you don't pick up the physical media, order a pizza, grab a six pack and invite some friends over and spend some time enjoying The Dead Pit on your streaming platform of choice.


Miss you Pops.
Posted by JakeBanzai at 6:18 PM