Many of us remember the joy of wandering into a Mom and Pop video store on a Saturday night looking for those wonderful, obscure jewels. Sure, those days are gone and I miss them.  But, I'd being lying if I didn't admit that from time to time, perusing the films recommended to me through the "all knowing algorithms" of Amazon has served to be a replacement for that feeling of finding buried treasure in crowded aisles of the local video store.

Such was the case earlier this week.  After a long day at work, I decided to crack open a beer and see what I could uncover on my Firestick.  I must have scrolled through my options for 20 minutes and then, just as I was about to throw in the towel and just watch another RiffTrax...there it was...

The film is centered around an aging abandoned mine.  A mine that has more than its fair share of documented deaths.  To ensure the proper level of tension, the film opens with a teaser that is well done and sets the mood nicely. Afterward, a group of explorers is hired by Myron Hemmings (portrayed by Rolf Theison).  Writers Chris Huntley and Melanie Anne Phillips put together a grand set of characters to send into a cave...and be picked off one by one by some unknown force as the crew delve deeper and deeper. 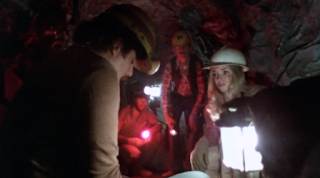 The sincere and earnest nature of the film had me completely taken in.  And although, while I was viewing it, I could tell it had many of the telltale signs of a low budget production, I couldn't help but marvel at how well the entire film was executed.  So, as the end credits rolled, I begin a bit of digging to find out more about the film.

One thing I found out was that in August 2009, distributor Code Red released a special edition DVD and Blu-ray disk.  Still intoxicated by the film, I ordered it right away.  And while I would have been perfectly happy to just have this amazing film on tangible media - what I got was so much more.

What I learned from the commentary and interviews was not only enlightening but provided enough encouragement to me that I felt the need to fire up the blog again after a year and a half hiatus. I've been fortunate to listen to a significant number of great DVD commentaries.  But, the one provided by Code Red was exceptional because it provided a glimpse not only at the true camaraderie of the filmmakers but also the hard work they all contributed to make the film. 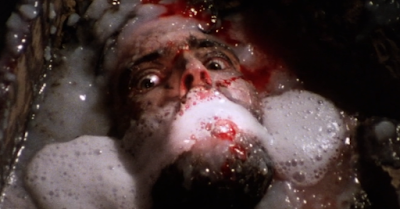 If you read any of the essays I've written, it is patently clear that I suspend disbelief with reckless abandon once opening credits begin.  But, the set pieces in the film drew me in and I was stunned when I learned how much of the film was made.  And even better, director Melanie Anne Phillips goes in to amazing technical detail about both the shooting and the looping of the film.  And the old fart in me could only think about how little those making digital movies know about the struggles of the generation prior to them. It is the struggles of filmmakers 30 and 40 years ago that make feel the need to "defend bad movies" (although they aren't bad at all).  Inside of me I feel the need to make people aware of how much hard work went into making a film just two generations ago - even if the film was destined for the drive-in circuit.

So, even though the video store might be gone - we are very fortunate to have companies like Code Red, Vinegar Syndrome and Severin to restore these classics and provide them with the respect they richly deserve.

Over the years, I've had a chance to meet some of my favorite filmmakers and tell them how much I've appreciated their efforts.  I hope, someday, to meet the inspiring artists responsible for this film and tell them personally how amazing it is and how their craftsmanship shines through in every frame.


By the way, I'm not being paid or put up to by Code Red, but, their catalog is amazing and I'd order every disk if I ever win the lotter.  Be sure to check them out at Code Red

Likewise, if you appreciate under appreciated or obscure cinema do check out Severin Films
or Vinegar Syndrome

Posted by JakeBanzai at 1:19 PM No comments: Links to this post