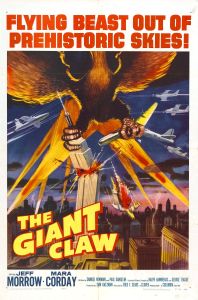 I guess it is safe to say you work at a pretty cool place when your boss send you a link to a movie that is begging for an essay.  So, as that is the case, it is time for me to shower some love on a much maligned film (although in some cases it is understandable). 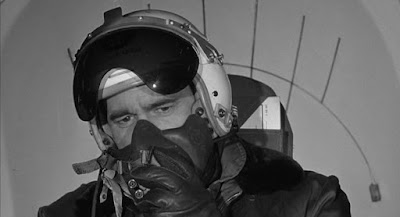 After the release of Jaws, there was an endless array of sea faring creature features ranging from Tentacles to Piranha and Up from the Depths.  In fact, I think you could safely say that sub-genre of "Monster" movies continued from 1974 until the summer of 1987 when Jaws 4 The Revenge appeared to finally kill of the trend.  But damn, what a run.  However, due to the dawn of both atomic and space age and the ever growing tension between the United States and the Soviet Union the 1950s saw a similar run of monster movies - Them, Tarantula, It, The Terror from Beyond Space, The Deadly Mantis and, of course, Attack of the Crab Monsters (we've all been there amiright?). Among those amazing films is the oft overlooked classic 1957's The Giant Claw. 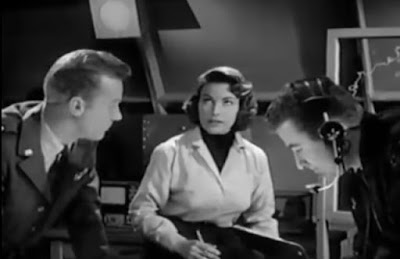 Now, I'm not obtuse - I genuinely understand why this picture is often derided. The titular beast of the film is, if watched in a particular frame of mind, laughter inducing. But, let's delve a bit deeper shall we?

In the well done opening narration sequence of this Columbia Pictures produced picture, narrated by the director Fred K. Sears, we are reminded of how the world had been utterly altered in only a generation.  The sequence reminds us that even in 1957, the world had grown much smaller and technology and automation where changing the very face of society itself. Of course, the narration leads handily to the first scene of the film as we are introduced to electronics engineer and pilot Mich McAfee (the always great Jeff Morrow) and mathematician Sally Caldwell (the stunning Mara Corday) as they perform radar flight tests in the north pole. 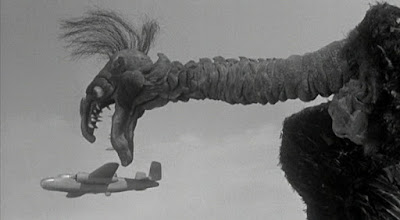 It is during these tests that McAfee first sights the creature and reports a UFO.  However, nothing appeared on the radar.  However, a squadron of jets are scrambled to search for this battleship sized flying anomaly.  During the search a pilot and jet is lost and the military is initially angry with McAfee as they believe the who incident is a ruse - despite the machinations of McAfee otherwise. McAfee and Caldwell are flown back to New York, but, their craft is attacked by a UFO.  In the attack the pilot is killed and McAfee has to crash land the craft.  A French-Canadian farmer sees the crash and brings McAfee and Caldwell along with the deceased pilot to his farm.   Soon it is discovered that other aircraft have gone missing and the military soon have to accept McAfee's assertion that something sinister is flying the skies - and it threatens all mankind.  The last act of the film leads to a climatic battle between man and giant bird over the skies of New York City. 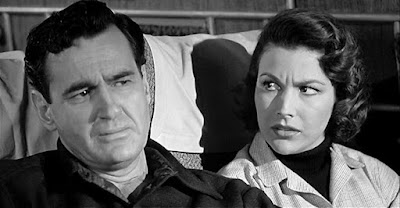 I have been asked a couple times in the past a question that usually boils down to "What is the most distinct difference between b-movies of the past and the current crop of direct to video (or NetFlix) films of today."  My answer is a bit simple but I believe it is generally accurate (in my opinion) and this film demonstrates it very well.  In era without CGI and shower scenes, a film, without regard to budget, had to feature good actors...even great actors.  That is the real selling point of this film.  The cast of actors are so good, their sincerity and commitment to their roles sell the film entirely.  That is why I can enjoy this film and still find some (NOT ALL) of the special effects.....humorous.  And I could say the same about almost all b-movies from the 40s through the mid-70s.  After Jaws, films had to boast at least attempts at great special effects.  They didn't always succeed but, it became a film's selling point in any event.  And if you could throw in a nude scene or two (or three) all the better for the demographics (Corman's Humanoids from the Deep leaps to mind right away - what a great late 70s flick that is). 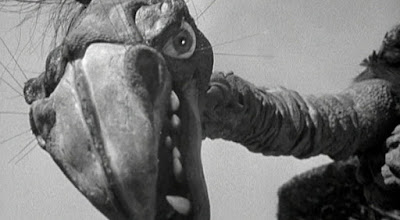 Now, I'm no prude by any stretch of the imagination...and that goes double when it comes to film. My mantra is and always will be "Art is Art". And if that means a shower scene for no good reason at all well so be it.  My larger point is, without the spectacular work by many of the actors in the these films audiences may very well have walked out on them (or driven out as these were likely part of a drive-in double bill).  Likewise, not every b-movie from the 50s had a cast of great actors (I'm looking at you Robot Monster - but I love you anyway).  But lets face it, as much as I love Charles Band, he's not going to get a Hugh Beaumont level actor to be in an Evil Bong movie...nor does he need to with cheesy SFX and nude shots.  That doesn't mean I don't love me some Evil Bong movies. 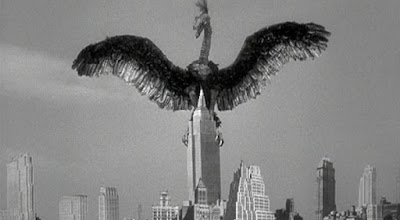 If you're remotely familiar with this picture, you're aware the effects were initially slated to be handled by the brilliant Ray Harryhausen (if that is a name unfamiliar to you, stop right now, go to Google and discover his brilliance and artistry), but, time and cost were deemed to be prohibitive. so, with time and money being an issue, a special effects studio in Mexico City which worked on the cheap was hired and created the creature featured in this production. The creature has been ridiculed and reviled essentially non-stop since the picture's1957 release.  I would suggest, however, that is is the sound effects for the creature that have as much to do with the ridicule as the puppet created for the creature itself.  But, in the only handful of times I've seen this picture (last night being probably only my third time in my 50 years) I just keep in mind the budget and other restraints this film had to overcome.  Now days, if Billy Joe Jim Bob wants to make a film about a giant creature, the special effects can be done well and cheap by firing up a laptop. In any event, the film is available in a number of ways online and I'd encourage you to check it out - even if your goal is just to have a laugh at it.  I still honestly believe you'll find more of the film engrossing than you'll find it funny.  If you have any thoughts or comments, leave them below or feel free to drop me a line at jakebanzai1@gmail.com

Miss you pops
Posted by JakeBanzai at 1:27 PM