Because in the End....Surf Nazis Must Die!

Please - before you email me - read the disclaimer. 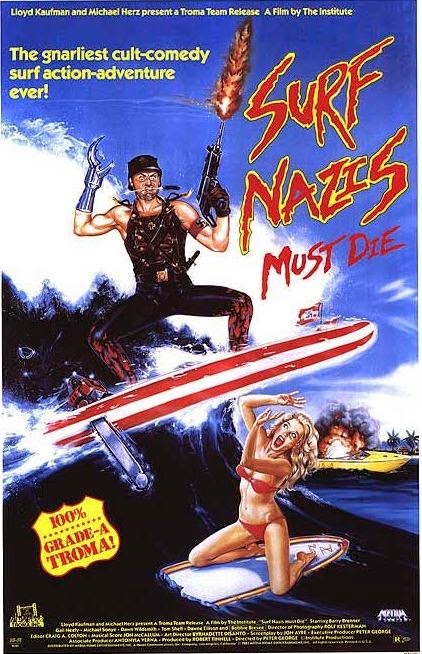 Popular culture has always been a mirror on the fears of the general population.  In the 50s there were films such as The Day the Earth Stood Still, On the Beach and Invasion of the Body Snatchers - each film an example of specific prospects of a Soviet rise to power after the second world as well as the Soviet Union becoming a nuclear power.  This followed through the 60s and 70s with classics such as Dr. Strangelove, Fail-Safe, and Twilight's Last Gleaming. 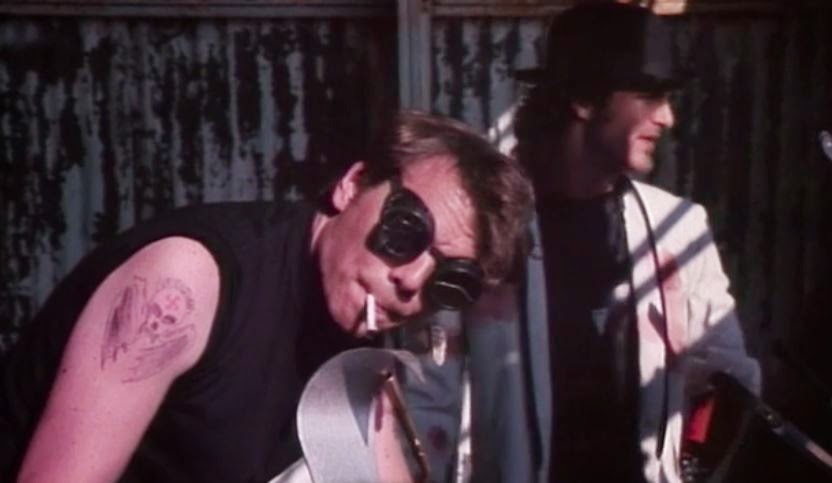 Although the fear of nuclear war continued to be a topic of popular culture in the 80s (The Day After and even The Terminator), violent crime was a topic that was used to bring in box office bucks as well.  The country's fear of falling victim to violent crime was stoked immensely by the 1974 classic Death Wish (and its many sequels) and continued through the 80s with films such as Robocop and the topic of this essay - Surf Nazis Must Die! 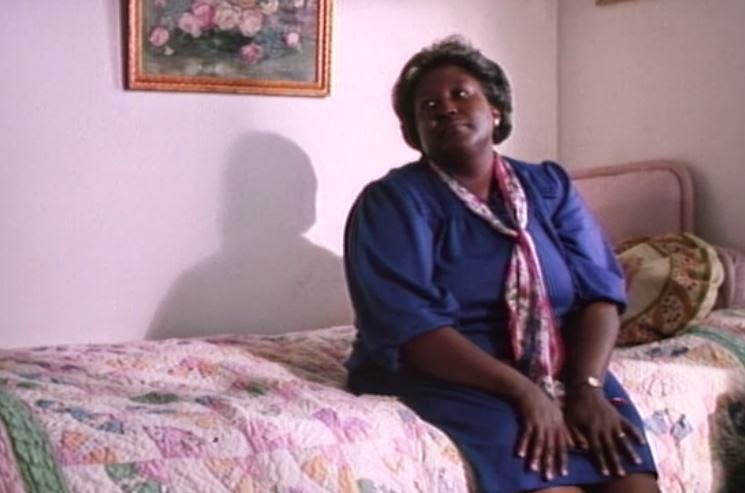 I have watched this film every two or three years since I picked it up on video in the late 80s.  It is often classified as a comedy, and I can only assume that has to do with the title.  When I mention this film to those who haven't heard of it, or seen it, there is generally a giggle (or even the occasional guffaw). Nevertheless, the film is not a comedy.  There are no real chuckles in this film, nor, I am convinced, is there meant to be.  Unless you find the film The Warriors to be funny also. 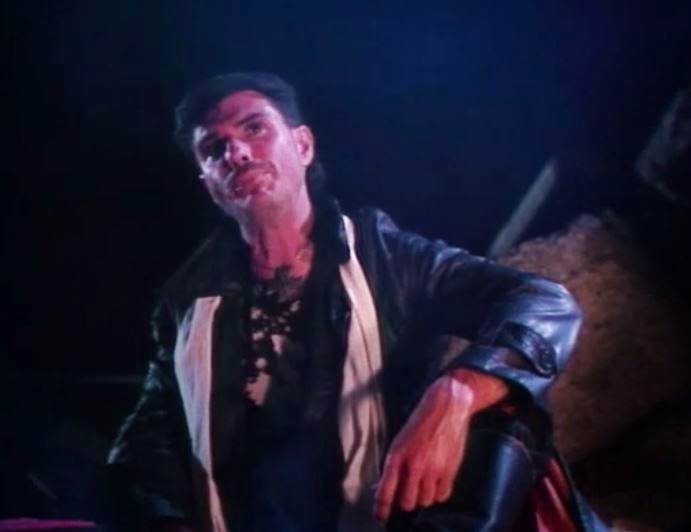 A major earthquake has demolished the LA coastline, leaving most areas in ruins and making the beaches lawless zones giving rise to a number of gangs.  The most brutal are the Surf Nazis who consider themselves the rulers of "The New Beach". The Surf Nazis are ruled over by Adolf (portrayed by Barry Brenner) and his female moll Eva (played by the always beautiful and talented Dawn Wildsmith).  Despite tensions among the other Nazis, such as Mengele (the brilliant Michael Sonye AKA Dukey Flyswatter), Hook ( Joel Hile), Brutus (Gene Mitchell) and Smeg (Tom Shell), the Surf Nazis attempt to consolidate their power to allow them to lord over the New Beach.

However - they did not anticipate the scorn of Mother Washington. 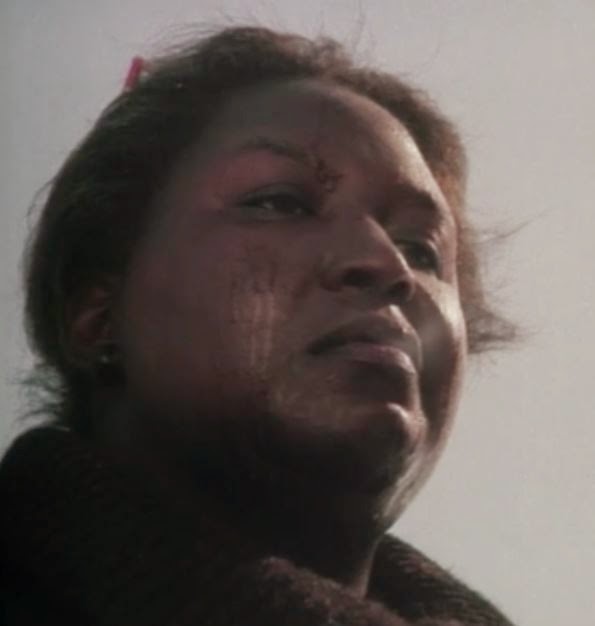 Mother Washington (the amazing Gail Neely) is put in a rest home by her son after the destruction of her house by the great earthquake.  Already upset at losing her independence, her breaking point is reached when her oil executive son is murdered after crossing the Nazis.  Mama Washington sets out to avenge her son's death.

The film could have played out as a straight actioner, with little or no character development.  But, that is not the case.  When Adolf asks around the bonfire "What was your worst moment?" the responses provide insight to the creation of the characters.  And, the beautiful Bobbie Bresee also makes an appearance as Smeg's Mom and provides insight to the tensions at home as she attempts to keep her son away from the Surf Nazis.

Certainly, like most any film, this one has its minor flaws. However, let me quote the Wikipedia article on this fine film.

Surf Nazis Must Die was criticized by reviewers as boring and hard to follow, and its acting, dialogue, and camerawork were widely panned. Janet Maslin wrote "Not even the actors' relatives will find this interesting." Roger Ebert stated that he walked out of the film after 30 minutes. 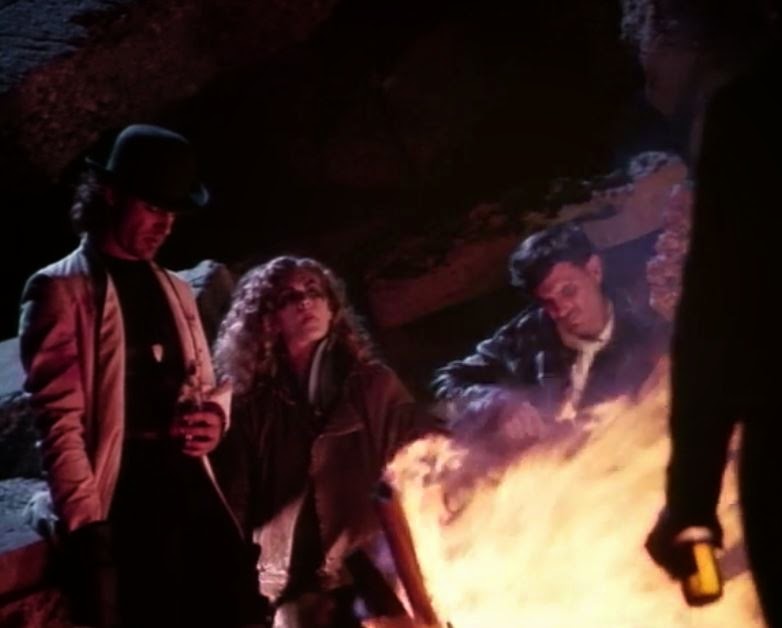 I simply take umbrage with this.  The film is not boring in any way.  As for hard to follow...perhaps if you have a below room temp IQ or no concept of social interaction.  To be entirely honest...if Roger Ebert walked out of this film, that is reason enough for me to love it.  On a side rant - I've said this before and I will say it again - I will never understand the idol worship of Roger Ebert.  He was a caustic, petty man who made a living tearing down the hard work of others.  Sure, I understand that as much I love this film, it isn't Casablanca, but, perhaps it could have been given additional pre-production, another rewrite and a slightly bigger budget.  Sometimes it is worth looking deeper and seeing what might have been.  People worked hard to make this film - so nice of Mr. Ebert to walk out on people he didn't even know. 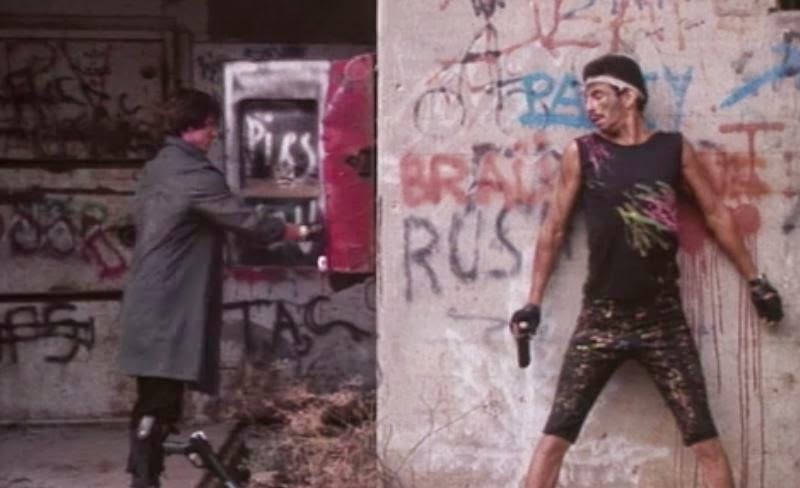 In any event, I watched the film on Netflix.  I couldn't find it on Hulu or Amazon Prime.  I have to be honest - the Netflix version was a bit pixelated and not the finest transfer but, nevertheless, very watchable.  However, it appears the Troma YouTube channel has a very nice version (see below).


Posted by JakeBanzai at 10:04 PM No comments: Links to this post

Please - before you email me - read the disclaimer. 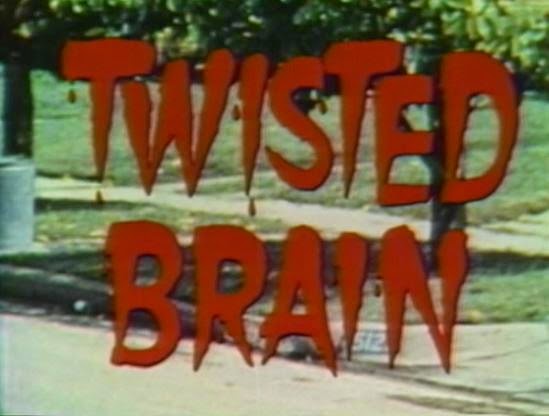 Gone for the most part are the days of the drive-in and the video store.  Also gone is the independent television station.  Those small bastions of entertainment unsupported by a network franchise that filled their broadcast hours with glorious wonders like My Favorite Martian and Dobie Gillis in the afternoon and then pulled out the real gems for the late night movie. 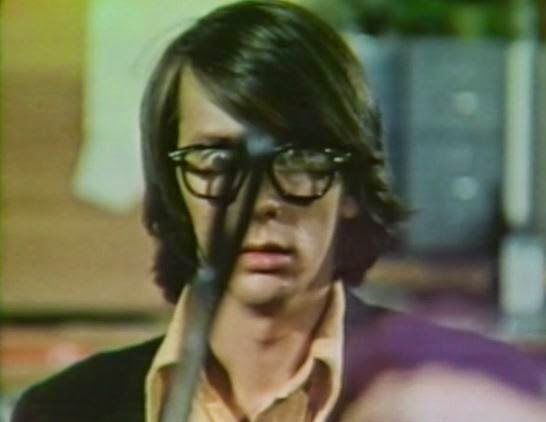 On an August night in 1982, it was the independent KPLR channel 11 (which appears to now be a CW affiliate ) that aired an amazing little piece of Americana.  And, if I've learned anything in researching this brilliant film it is this - everyone remembers the paper cutter.

When I saw the film the title was Twisted Brain - and when I re-watched the film recently on Amazon Prime, that is the title card still used.  Given that the film is essentially a Jekyll and Hyde story, I'm not certain that title was accurate, but, it certainly whetted my appetite on that August night as I settled in with a couple of Mello Yello sodas and a bag of Doritos (back when I could consume 10,000 calories a day and not put on weight). 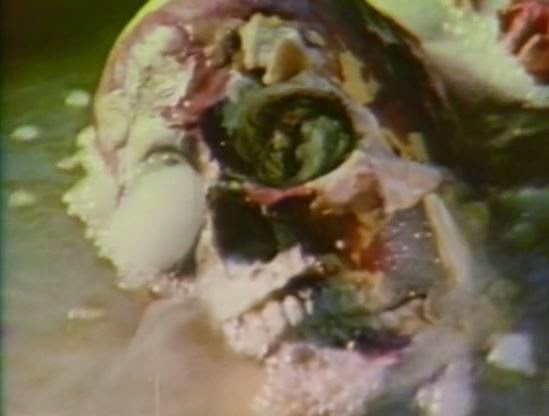 The film, directed by Larry Stouffer and written by J.D. Feigelson (who also wrote the wonderful Dark Night of the Scarecrow), is the story of nerdy and put upon Vernon Potts (played perfectly note for note by Pat Cardi).  Vernon is convinced he can change the physical appearance as well as the mental state of a test subject.  In Vernon's case, his test subject is a Guinea Pig named Mr. Mumps.

Sadly for Mr. Mumps and Vernon, they are both endlessly tormented. Mr. Mumps by Mr. Grigg's (portrayed almost too well by Jeff Alexander) rat killing cat and Vernon by virtually everyone else in the school except for the beautiful and kind-hearted Robin (played by Rosie Holotik). 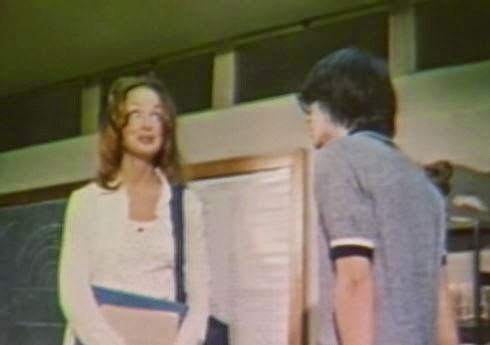 In a turn of events that involves janitors, cats, flashlights and sulfuric acid, poor Vernon consumes his formula and unleashes the...Twisted Brain.  And from that point the film is one part Jekyll and Hyde and one part revenge.  The film culminates in an ending I wasn't expecting in the summer of '82 and was no less bothersome to me today.  I wouldn't say the ending affects my interest in this film - it was certainly the most realistic ending. But, at 2 in the morning perhaps not the ending I wanted.

I cannot suggest this is a forgotten gem.  A simple web search suggests the picture is fondly remembered for its late night showings at drive-ins and on television alike.  Many of the fine people associated with this film continue to work in the industry including the always amazing Austin Stoker who portrays  Lt. Bozeman in this film, but is also remembered by many film lovers from classics like Battle for the Planet of the Apes and Assault on Precinct 13.  Pat Cardi went on to work extensively behind the camera. I was lucky enough to find a great interview with him on www.terrortrap.com and I've included the link below. 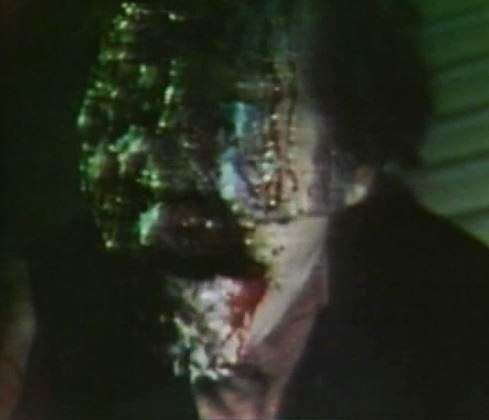 Code Red release a special edition DVD in 2010 that is a bit hard to come by - I'm seriously considering picking up a pricey copy.  My review is based on the rather poor transfer available on Amazon Prime, but, when you see the comparison pictures of the Code Red edition you realize how glorious this film can look.  There are even some collector priced VHS tapes available out there as this title has been released multiple times in various formats.  To date, no Blu-ray is available yet, but, perhaps if interest continues to build for this wonderful little film a Blu-ray may yet happen (with many extra features!!).

So, if you are feeling nostalgic and missing the 70s or the 80s - track down Horror High AKA Twisted Brain and remember why you fear the paper cutter!


An Interview with Pat Cardi from Horror High

Posted by JakeBanzai at 4:09 PM No comments: Links to this post